The grave could not hold Him!

Jesus died on the cross for our sins………He was placed in the tomb for three days……….

When the disciples came to check on Him……He was gone!

Jesus is alive!  Even though Jesus died on the cross…..the grave could not hold him! 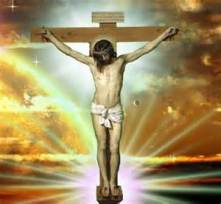 As they led Jesus away, a man named Simon, who was from Cyrene, happened to be coming in from the countryside. The soldiers seized him and put the cross on him and made him carry it behind Jesus. A large crowd trailed behind, including many grief-stricken women. But Jesus turned and said to them, “Daughters of Jerusalem, don’t weep for me, but weep for yourselves and for your children. For the days are coming when they will say, ‘Fortunate indeed are the women who are childless, the wombs that have not borne a child and the breasts that have never nursed.’ People will beg the mountains, ‘Fall on us,’ and plead with the hills, ‘Bury us.’ For if these things are done when the tree is green, what will happen when it is dry?”

Two others, both criminals, were led out to be executed with him. When they came to a place called The Skull, they nailed him to the cross. And the criminals were also crucified—one on his right and one on his left.

Jesus said, “Father, forgive them, for they don’t know what they are doing.” And the soldiers gambled for his clothes by throwing dice.

The crowd watched and the leaders scoffed. “He saved others,” they said, “let him save himself if he is really God’s Messiah, the Chosen One.” The soldiers mocked him, too, by offering him a drink of sour wine. They called out to him, “If you are the King of the Jews, save yourself!” A sign was fastened above him with these words: “This is the King of the Jews.”

One of the criminals hanging beside him scoffed, “So you’re the Messiah, are you? Prove it by saving yourself—and us, too, while you’re at it!”

But the other criminal protested, “Don’t you fear God even when you have been sentenced to die? We deserve to die for our crimes, but this man hasn’t done anything wrong.” Then he said, “Jesus, remember me when you come into your Kingdom.”

And Jesus replied, “I assure you, today you will be with me in paradise.”

By this time it was about noon, and darkness fell across the whole land until three o’clock. The light from the sun was gone. And suddenly, the curtain in the sanctuary of the Temple was torn down the middle. Then Jesus shouted, “Father, I entrust my spirit into your hands!” And with those words he breathed his last. 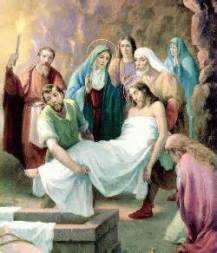 The Burial of Jesus

Now there was a good and righteous man named Joseph. He was a member of the Jewish high council, but he had not agreed with the decision and actions of the other religious leaders. He was from the town of Arimathea in Judea, and he was waiting for the Kingdom of God to come. He went to Pilate and asked for Jesus’ body. Then he took the body down from the cross and wrapped it in a long sheet of linen cloth and laid it in a new tomb that had been carved out of rock. This was done late on Friday afternoon, the day of preparation, as the Sabbath was about to begin.

As his body was taken away, the women from Galilee followed and saw the tomb where his body was placed. Then they went home and prepared spices and ointments to anoint his body. But by the time they were finished the Sabbath had begun, so they rested as required by the law.

But very early on Sunday morning the women went to the tomb, taking the spices they had prepared. They found that the stone had been rolled away from the entrance. So they went in, but they didn’t find the body of the Lord Jesus. As they stood there puzzled, two men suddenly appeared to them, clothed in dazzling robes.

The women were terrified and bowed with their faces to the ground. Then the men asked, “Why are you looking among the dead for someone who is alive? He isn’t here! He is risen from the dead! Remember what he told you back in Galilee, that the Son of Man must be betrayed into the hands of sinful men and be crucified, and that he would rise again on the third day.”

Then they remembered that he had said this. So they rushed back from the tomb to tell his eleven disciples—and everyone else—what had happened. It was Mary Magdalene, Joanna, Mary the mother of James, and several other women who told the apostles what had happened. But the story sounded like nonsense to the men, so they didn’t believe it. However, Peter jumped up and ran to the tomb to look. Stooping, he peered in and saw the empty linen wrappings; then he went home again, wondering what had happened. 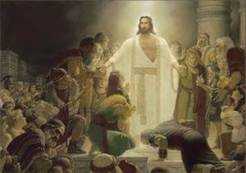 Jesus Appears to the Disciples

Then the two from Emmaus told their story of how Jesus had appeared to them as they were walking along the road, and how they had recognized him as he was breaking the bread. And just as they were telling about it, Jesus himself was suddenly standing there among them. “Peace be with you,” he said. But the whole group was startled and frightened, thinking they were seeing a ghost!

“Why are you frightened?” he asked. “Why are your hearts filled with doubt? Look at my hands. Look at my feet. You can see that it’s really me. Touch me and make sure that I am not a ghost, because ghosts don’t have bodies, as you see that I do.” As he spoke, he showed them his hands and his feet.

Still they stood there in disbelief, filled with joy and wonder. Then he asked them, “Do you have anything here to eat?” They gave him a piece of broiled fish, and he ate it as they watched.

Then he said, “When I was with you before, I told you that everything written about me in the law of Moses and the prophets and in the Psalms must be fulfilled.” Then he opened their minds to understand the Scriptures. And he said, “Yes, it was written long ago that the Messiah would suffer and die and rise from the dead on the third day. It was also written that this message would be proclaimed in the authority of his name to all the nations, beginning in Jerusalem: ‘There is forgiveness of sins for all who repent.’ You are witnesses of all these things.

“And now I will send the Holy Spirit, just as my Father promised. But stay here in the city until the Holy Spirit comes and fills you with power from heaven.” 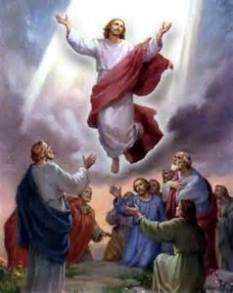 Then Jesus led them to Bethany, and lifting his hands to heaven, he blessed them. While he was blessing them, he left them and was taken up to heaven. So they worshiped him and then returned to Jerusalem filled with great joy. And they spent all of their time in the Temple, praising God.

He ascended to God the Father and is seated with Him in heaven.

Hallelujah!  Praise Jesus the Son of God…..the Lamb of God….

the Savior of the World!

Hello. My name is Rosalie Tuomey and I live in Cleburne, Texas. Welcome to my site. I hope you enjoy your visit! View all posts by Rosalie Tuomey